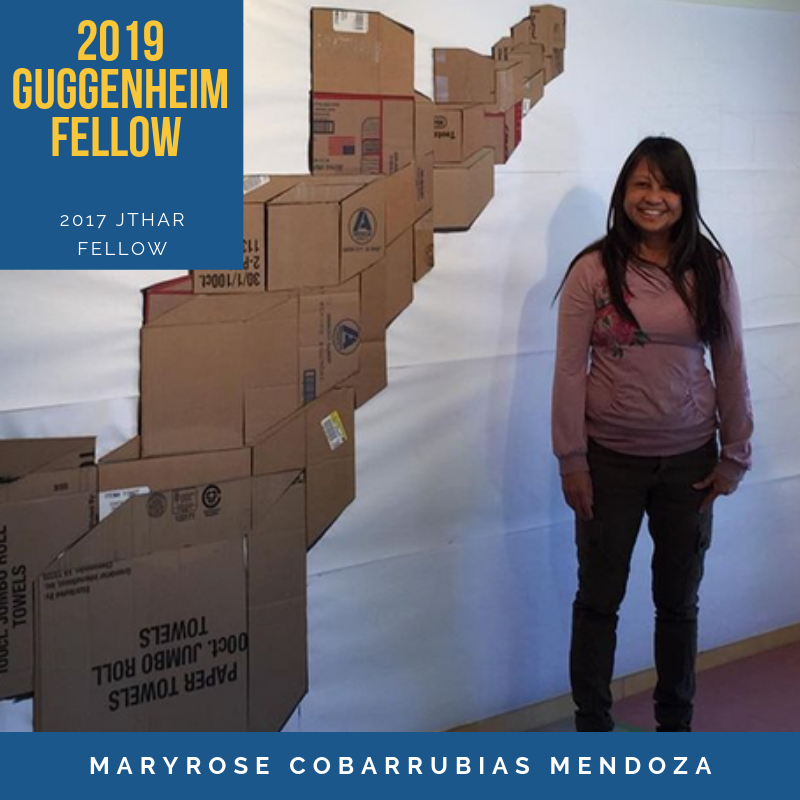 We are excited to announce that our 2017 JTHAR fellow Maryrose Cobarrubias Mendoza has been awarded the 2019 Guggenheim Fellowship. Mendoza is part of a diverse group of 168 scholars, artists, and writers. Appointed on the basis of prior achievement and exceptional promise, the successful candidates were chosen from a group of almost 3,000 applicants in the Foundation’s ninety-fifth competition.

Known for her strong contemporary voice, Mendoza blends her Filipino heritage with her unmistaken political, yet personal, commentary. She has made an incredible mark in Southern California and New York. After attending The Otis Art Institute of Parsons School of Design and receiving her MFA from the Claremont Graduate University, Maryrose is now an Associate Professor at Pasadena City College.
​
She has received awards from The Department of Cultural Affairs, C.O.L.A. and Los Angeles Artist Fellowship, Los Angeles (2012), PlugIn Gallery, Canada (1997), Art Matters, NY (1995), and The National Foundation for the Advancement in the Arts (1984). Her solo exhibitions include: Commonwealth & Council, S1f Gallery, Los Angeles; Solway Jones Gallery, Los Angeles; Haus Gallery, Pasadena; YYZ Artist’s Outlet, Toronto.

Since its establishment in 1925, the John Simon Guggenheim Memorial Foundation has granted more than $360 million in Fellowships to over 18,000 individuals, among whom are scores of Nobel laureates, Fields Medalists, poets laureate, members of the various national academies, and winners of the Pulitzer Prize, Turing Award, National Book Award, and other significant, internationally recognized honors.

The Guggenheim Fellowship program remains a significant source of support for artists, writers, and scholars in the humanities and social sciences, and scientific researchers. New and continuing donations from friends, Trustees, former Fellows, and other foundations have ensured that the John Simon Guggenheim Memorial Foundation will be able to continue to carry out its historic mission.

For more information on the Fellows and their projects, please visit the Foundation’s website.